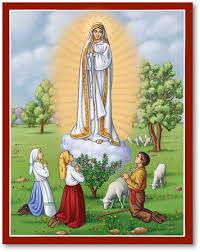 “I welcome you warmly to the Cathedral of the Assumption as we accompany one of the six centennial statues of Our Lady of Fatima, especially blessed by Pope Francis last January and commissioned to travel to the continents of Europe, North America, Latin America, Australia, Africa and Asian Pacific.

Tonight, the eyes of Europe are on Carlow as we welcome this wonderful image of Our Lady of Fatima. The Irish leg of the visit began in St. Patrick’s Cathedral, Armagh on March 4th, last night the visit centred on the Pro-Cathedral in Dublin; tonight, it is the turn of the Cathedral of the Assumption, Carlow. It is the mission and mandate of a group who call themselves ‘The Alliance of Two Hearts’ to accompany this Pilgrim Statue on its route. Tonight we join them in this great moment of accompaniment.

The heart is in medical terms the size of “a clenched fist”. It is where love finds root and takes hold in all our lives. As we gather, we become aware of the very fractured and broken world we live in, as we pray and do what Our Lady of Fatima invites us to do again and again: pray for God’s love and mercy …”

Our Lady appeared to the three and invited them to return to the Cova during five consecutive months, on the 13th day of each month – June, July, September and October. In the intervening month of August the apparition took place in a different location, because the children were carried off by the local Civic Administrator. They weren’t believed and find good company in many of the visionaries around our world. From Lourdes to Knock, the word of the visionaries was dissected and forensically examined, as it must be. The Church needs certainty before declaring an apparition is what it sets out to be.

Tonight’s gospel from St. Luke reminds us to be compassionate, to be non-judgemental, to be non-condemnatory and to be forgiving. What a very different world we would have if we realised all these things and ticked all these boxes. There would be no need to build walls or invest in the latest CCTV apparatus, but we know and Our Lady appreciates, we live in the real world where at times compassion is lacking; judgements are passed like ‘fluff at a wake’; forgiveness is absent and very scarce.

I have a particular connection and affection to Our Lady of Fatima. For many years in St. Mary’s Drogheda I was chaplain to the school we called ‘Fatima’. I recall some of the natives of the town reminding me: “Father, I was born in Lourdes, went to Fatima but never left Drogheda!” The Lourdes they referred to was Our Lady of Lourdes Hospital established by Mother Mary Martin and the MMM’s. to this day I have a statue of Our Lady of Fatima on my bedside locker, she looks down on me as I sleep. I think of the story Pope Francis told the Bishops during our recent exchange and visit with him on our Ad Limina Apostolorum visit – he talked about the problems that he meets in his daily work, no different than any of us. He writes the unsolved ones and puts them under the statue of a sleeping St. Joseph in his bedroom. I think I put mine before Our Lady of Fatima in the little oratory, next door to my bedroom.

I had the privilege of visiting Fatima twice, the knee pads are somewhere in the spare room at Bishops House. You haven’t been to Fatima, if you haven’t got on your knees! I recall a privileged per chance visit to the Convent in Coimbra, where Lucia Santos had entered the Carmel of St. Teresa, taking the religious name Sr. Maria Lucia of the Immaculate Heart. We’re back to the heart again! She would have visited Fatima many times, returning to that visit in Coimbra many years ago and her opening remarks: “we’ve been expecting you”. I don’t know where it came from, we had told no one of our plans, except of course the Lord himself.

This year is the 100th anniversary of the Apparitions at Fatima. It is only right and fitting that we in Carlow should welcome the Statue but more importantly what it seeks to represent – a renewal in family life with an infusion of peace permeating every aspect of society and a renewal in the value and sanctity of life. It has been a difficult few weeks once again for the Church and for Society. The recent Mother and Baby Home revelations and the continuous bringing to mind of the pain and suffering of those who suffered as if their initial suffering wasn’t enough. Like the three children of Fatima, many of those who suffered were children.

Over the years since 1917, much of society was fascinated by ‘the third secret of Fatima’. Wasn’t there some attempt in April 1981 to hi-jack the Aer Lingus flight 164 from Dublin to London, which eventually diverted to France on the strength of such a secret? I often think if we lived what we know about Fatima since Day 1, and not get over excited about secrets or subterfuge messages, we would today live in a much better world and create a much richer society where compassion and forgiveness are the currency of the day.

St. John Paul II visited Fatima twice, both visits were embedded in the concept of reconciliation. His first was a year after he survived Mehmet Ali Agca’s assassination attempt while his second pilgrimage was on the tenth anniversary of the same assassination attempt. While there, in the presence of the eighty-four-year-old Sr. Lucia, he gave thanks to Our Lady for the liberation of east central Europe and for his own deliverance from death ten years earlier. Tonight we have come to ask and to give thanks. To ask with open hearts that Our Lady of Fatima will pour out graces on us and to give thanks for the graces we have unworthily received.

Our Lady of Fatima, pray for us …

Immaculate Heart of Mary, pray for us …

Blessed Francisco, pray for us…

Blessed Jacinta, pray for us …”