Bishop of Kildare and Leighlin 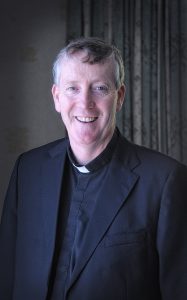 Denis Nulty was born in Slane, County Meath on 7 June 1963 to parents Den Nulty and Nan Balfe. He is the youngest of five children, with two brothers and two sisters. The family farm was the home where Denis and his siblings were reared.

Denis entered the seminary at Saint Patrick’s College, Maynooth in September 1981, completing a BA in 1984 and a BD in 1987.

He was ordained a Priest for the Diocese of Meath in Saint Patrick’s Church, Slane on 12 June 1988 by Bishop Michael Smith in the presence of Bishop John McCormack.

In 2006 Father Denis followed a course of study in All Hallows College, Dublin, leading to an MA in Management for the Pastoral and Voluntary Services being awarded by DCU.

In September 2006 Bishop Smith appointed Father Denis as Vicar Forane for the Duleek Deanery which comprises seven parishes. Father Denis was Chairperson of the Council of Priests in the Diocese of Meath for past eight years prior to his appointment as Bishop of Kildare & Leighlin. 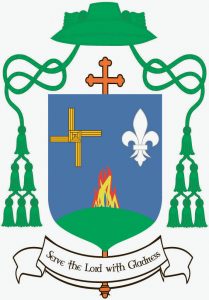 The Episcopal coat of arms chosen by Father Nulty is in the standard form
of cross, shield and galero.

The galero is traditionally the broad brimmed hat
and tassels which signify the user’s place in the hierarchy.

At the base of the shield is a Vert (green) hill with a fire on top.

Father
Denis is a native of Slane in County Meath, a place well known for the
lighting of the Paschal Fire by Saint Patrick on the hill at Easter.

Above the hill is an Azure ground. Having been born and raised close to
the Boyne at Slane and having served as Parish Priest in Drogheda along the
mouth of the Boyne, it is hardly surprising that rivers would feature here on the shield.

Father Denis in recalling the origins of the faith in Ireland on Slane, wanted
also to include the other great symbol of the faith in Ireland with the Cross
of Saint Brigid of Kildare in Or (gold) on the left side. On the right side of the shield is a Silver Fleur-de-Lys. As an ancient Christian symbol it represents purity, and therefore in turn the Virgin Mary.

The colours in the shield signify the virtues and gifts that Father Denis hopes for himself in his Episcopal ministry and virtues he will endeavour to spread to all in his pastoral care.

His Episcopal motto – ‘Serve the Lord with Gladness’ is taken from Psalm 100.