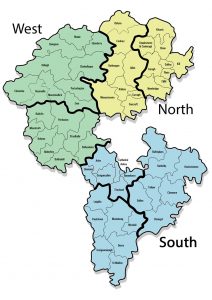 The present shape of Kildare and Leighlin diocese dates from 1678, when the previously separate dioceses of Kildare and Leighlin were for the first time placed under the pastoral care of the same Bishop, Dr Mark Forristal O.S.A., who originally has been appointed Bishop of Kildare alone in the year 1676. The Archbishop of Armagh at the time was St Oliver Plunkett, martyred in Tyburn, London in 1681.

The ancient separate dioceses of Kildare and Leighlin until the twelfth century were centred around the illustrious monasteries of Kildare and Old Leighlin. That explains how these are the sites of the ancient Cathedrals of the two dioceses. Old Leighlin and Kildare have had the Anglican (Church of Ireland) Cathedrals of St Laserian and St Brigid since the sixteenth century Reformation, when King Henry VIII brought about the closure of the monasteries.

St Brigid of Kildare is the principal patron of our diocese. Secondary patrons are St Conleth (first bishop at Kildare) and St Laserian (first bishop at Leighlin). For the period until the twelfth century the organisation of the Irish Church was very much centred on the most important monasteries. The boundaries of the Irish dioceses were fixed at important Synods held in Rathbreasail (1111 A.D.) and Kells (1152 A.D.)

Important places of pilgrimage in the diocese are Kildare (to visit the places associated with St Brigid Abbess of Kildare) and St Mullins, Co. Carlow (location of the famed St Moling, Bishop). Of special interest all over the diocese are sites where penal altars are situated, where priests and people attended open air Mass in the period of the Penal Laws (when Catholics were forbidden to build Churches for worship). The witness of our ancestors in that bleak period is a strong reminder to us of the resilience of the faith of the Irish throughout our history.

Bishop James Keeffe became bishop of the united dioceses in 1752 and was in charge for the next thirty five years. It was he who made the decision to build Carlow College as a place for the education of Catholic young men for the professions. From its opening, the College also took on the role of being a seminary for the training of young men for the priesthood. The central part of the main building was erected in the mid 1780s. The College opened its doors to the first students on 1 October 1793. By then Bishop Daniel Delany had succeeded Dr Keeffe. Both of them lived in Tullow. Bishop Delany founded two religious congregations for the work of education: Brigidine Sisters (1807) and Patrician Brothers (1808). A later Bishop, James Doyle, who had been a professor at Carlow College for six years, was the one who oversaw the building of Carlow Cathedral of the Assumption of Our Lady, which he officially opened on 29 November 1833.

The division of the diocese into seven deaneries and 56 parishes in illustrated by the accompanying map. The actual catholic population of the diocese is about 225,000. Four large urban areas are included: Naas, Newbridge, Portlaoise and Carlow.

The Churches of the Diocese include a great variety in architectural style from the thirteenth century Duiske Abbey (Parish Church of Graignamanagh) to the Church of the Irish Martyrs (1997) in Ballycane, Naas.

The territory of the diocese includes County Carlow and parts of Counties Kildare, Laois, Offaly, Wicklow, Kilkenny and Wexford.

The Churches of Kildare and Leighlin 2000 A.D. with drawings by John Duffy and text edited by John McEvoy (Éditions du Signe, Strassbourg, 2001)

Kildare & Leighlin is one of the 26 Irish Dioceses, it has 56 parishes divided into three deaneries. It has an estimated Catholic population of over 200,000.