On Monday the 7th of November at 7.00pm in St Laserian’s Cathedral, Old Leighlin the Feast of St Willibrord, Patron Saint of Luxembourg and his Co Carlow connection will be celebrated with an ecumenical service led by the Right Reverend Michael Burrows, Bishop of Ossory, Cashel, Ferns, Lismore, Waterford and Leighlin along with the Most Reverend Denis Nulty, Bishop of Kildare and Leighlin. This will be followed by a lecture by Professor Dáibhí Ó Cróinín, Department Of History, NUI Galway on Clonmelsh, Willibrord, and Carlow’s Contribution to the Anglo-Saxon mission on the continent in the 8th century. All are welcome to attend.

St Willibrord was born near York in England and he is the Patron Saint of Luxembourg. He was trained and ordained at a religious site located in the townland of Garryhundon, Co Carlow commonly referred to as Killogan, Rath Melsigi (Rathmelsh) or Clonmelsh Graveyard. During the seventh and eighth centuries this site was the most important Anglo-Saxon ecclesiastical settlement in Ireland. It was here from 678AD to c. 720AD that Willibrord and many other Englishmen were trained for the continental mission. He is buried in the Basilica of Echternach, Luxembourg which is the centre of his monastery.

The evening in St. Laserian’s Cathedral will begin at 7.00pm with ‘Vespers of Saint Willibrord’ an ecumenical service led by the Bishop Michael Burrows, and Bishop Denis Nulty.

This will be followed (7.45pm) by a lecture by Prof. Dáibhí Ó Cróinín, Department of History, NUI Galway on the history and importance of Clonmelsh, Willibrord, and Carlow’s Contribution to the Anglo-Saxon mission on the continent in the 8th century. Since the early 1980s Prof Ó Cróinín has been researching and publishing articles on the connection with Carlow and the continental missions. In 690AD Willibrord led a successful mission from Carlow, made up of Irishmen and Englishmen. As part of his abbey in Echternach he established a very important scriptorium and for a considerable period of time the Abbey produced many of the bibles, psalms and prayer–books that are to be found today in the great libraries of Europe. It is likely that the first generation of these scribes were from Co. Carlow or had trained here. Many of the earliest Anglo-Saxon manuscripts were written in Irish script either by Irish monks based in Britain or by Anglo-Saxons who were trained by the Irish. From Echternach he continued to co-ordinate missions to the surrounding countries until 739AD, when he died aged 81.

Great devotion and religious festivals are still held to this day in his honour and in particular a hopping procession, a dance that dates back to, if not predates St. Willibrord’s life time. The hopping procession which takes place annually on the Tuesday after Pentecost Sunday sees thousands of people from across Luxembourg, Belgium, Holland and Germany descending on Echternach to partake This unique procession coupled with the European importance of the Abbey saw the procession granted UNESCO World Heritage Status in 2010.

In June 2017 both Bishop Burrows and Nulty will lead a joint Diocesan Pilgrimage to Echternach, the town in Luxembourg where St Willibrord is buried in the vault of the monastery he established there. This is one of the highlights of a programme devised for 2017 to celebrate the historical connection between the two areas. The pilgrimage bookings are being coordinated through Tully’s Travel Agents, Carlow Town. 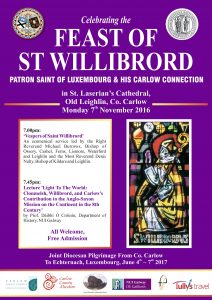