About World Day of the Sick

Established in 1993 by Saint John Paul II on February 11, the Feast Day of Our Lady of Lourdes, a different city is chosen each year to host the World Day of the Sick. This year the choice has fallen on Calcutta in India, and Pope Francis has highlighted the figure of Saint Teresa of Calcutta as a model of charity who made God’s love for the poor and sick visible.

Pope Francis says that those who care for the sick and give of themselves with generosity and straightforward love – like St. Mother Teresa of Calcutta – are amongst the Church’s most credible evangelisers.

In his message for the World Day of the Sick 2019, the pope focuses on Jesus’s words to the Apostles: “You received without payment; give without payment” (Mt 10:8) Pope Francis urges believers to promote a culture of generosity, noting that the joy of generous giving is a barometer of the health of a Christian.

Pope’s message for World day of the sick

Liturgy Notes for Anointing of the Sick within Mass

This material draws upon and presumes the use of the Rite of Anointing within Mass found in the ritual book “Pastoral Care of the Sick” p. 103 ff. The content deals with some practical considerations ahead of the liturgy and then walks through the liturgy itself highlighting practical details and suggestions. Those preparing the liturgy will no doubt have their own ideas to add to it.

Liturgy Notes Anointing of the Sick within Mass

A Prayer of Blessing for the Sick

A Prayer of Blessing for the Sick 2019 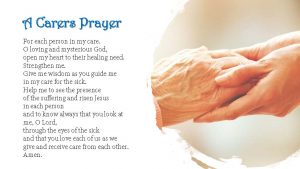