Recently County Carlow welcomed a delegation from Echternach, Luxembourg, led by Yves Wengler, Mayor of Echternach, as part of the ongoing renewal of friendship between both areas. The highlights of the visit were the signing of a Friendship Agreement between both Councils and the unveiling of the restored early medieval Cross of Rath Melsigi. In AD 690, St. Willibrord, Patron Saint of Luxembourg, First Apostle of the Netherlands, departed County Carlow after spending twelve years at the famed monastic settlement of Rath Melsigi and undertook his mission to the continent. In AD 698 he established his major monastery in the town of Echternach. His monastery also had a scriptorium which over the centuries produced many fabulous manuscripts. Cllr. John Pender, Cathaoirleach of Carlow County Council, led the welcome by Carlow County Council.

Since 2000 there have been several visits by delegations to both towns. Significantly, this visit was the first led by the Echternach Council. Accompanying Mayor Wengler were Aldermen Ben Scheuer and Luc Birgen with Councillors Jean-Claude Strasser, Ricardo Pacheco and Christophe Origer. Also present were members of the Willibrordus Bauverein (Willibrord Foundation) who have been to the fore of re-establishing contact between both areas. Among them was Pierre Kauthen, former President and Alain Muller, visit coordinator. The group were joined by Ivan Healy, Honorary Consul General to the Grand Duchy of Luxembourg, making this his first visit to the county as Honorary Consul.

The highlight of the four days was on Wednesday 7th August last when the entire day was devoted to exploring places associated with St. Willibrord in County Carlow. At midday, the delegation, with an invited audience, gathered at Rath Melsigi, Garryhundon, County Carlow, around the recently restored early medieval cross, which is now all that remains in County Carlow of the monastic settlement. The cross has for a long time been in several pieces and in recent months the National Monuments, Kilkenny Branch, OPW, in partnership with Carlow County Council, through Carlow County Museum, restored the cross.

In his welcome to Rath Melsigi, Cathaoirleach John Pender said “it is here, at Rath Melsigi, Ireland’s most important ecclesiastical settlement in the 7th and 8th centuries, that Willibrord spent twelve years being trained under the guidance of St. Ecgberct of Rath Melsigi and Iona. It is very likely, that Willibrord and his colleagues were ordained at the nearby monastery of Old Leighlin, the seat of the Bishop of Leighlin.”

Mayor Wengler said “Our stay in County Carlow is very interesting. We have a very filled program with a lot of interesting visits and meetings. But I think that the most exciting moment was the rededication of the 7th century cross at Rath Melsigi. This place is the direct link from Carlow to Echternach by St. Willibrord.” Honorary Consul Healy in his speech said that we were standing on holy ground that joined both County Carlow and Echternach through nearly 1,300 years of history.

Cathaoirleach Pender then asked Mayor Wengler and Honorary Consul Healy to assist him in unveiling the restored 7th century cross that St. Willibrord would have stood beside. Then the Most Reverend Denis Nulty, Bishop of Kildare & Leighlin, Archdeacon Robin Bantry-White and Canon Nancy Gillespie led the rededication of the Cross of Rath Melsigi. The Litany of St. Willibrord was recited and the unveiling ceremony concluded with all present gathering in a circle and undertaking the ‘hopping’ that is celebrated each year in Echternach in hounour of St. Willibrord. The ‘hopping procession’ has UNESCO World Heritage Status. The Cross of Rath Melsigi is not publically accessible without permission from the surrounding landowner.

Later in the day, the delegation visited the Town Hall where both Councils met, being welcomed by Cathaoirleach Pender. Kathleen Holohan, CE of Carlow County Council, outlined the Council’s vision for County Carlow and acknowledged the long and important historical link between both Carlow and Echternach. Then both Cathaoirleach Pender and Mayor Wengler signed copies of the Friendship Agreement. The Carlow copy of the agreement will be framed and displayed in Carlow County Museum.

Through the mists of time St. Willibrord’s Carlow connection, for the most part, had been forgotten until 1982 when Prof. Dáibhí Ó Cróinín, Department of History, NUI Galway, began researching this aspect of our history. Over the course of the last thirty-seven years this historical connection between both areas has been re-established. Prof Ó Cróinín was present at the unveiling and he said “Rath Melsigi is at the heart of the Irish and English engagement with the continent in the Early Middle Ages. From here a group of Irishmen and Englishmen set out in AD 690 on a voyage that would transform the religious and political landscape of Europe forever and lay the foundations for the great cultural revival of the decades leading up to AD 800 that scholars call The Carolingian Renaissance.”

Earlier in the day the delegation had a guided tour of Carlow County Museum and spent time viewing the special St. Willibrord exhibition that the Museum has displayed since 2017. The Museum has been coordinating the contact and events from the Carlow side for many years now. They were welcomed to the Cathedral of the Assumption by the Bishop Nulty and Fr Ruairi O Domhnaill, Administrator. Members of the Presentation Band played several pieces of music during their visit to the Cathedral. The delegation was pleased to see the Relic of St. Willibrord on display, the beautiful bronze statue gifted to County Carlow in 2017 by the people of Echternach to say “Thank You” to Carlow for training and ordaining St. Willibrord.

In the afternoon the delegation were welcomed to Leighlinbridge by local historian Martin Nevin. Martin was one of the original contacts between both areas and he had welcomed the first tour from Echternach to Carlow in 2000. The delegation were welcomed to Old Leighlin by Archdeacon Robin Bantry-White, Canon Nancy Gillespie and George Kidd, where they guided them from Molaise’s Holy Well to St. Laserian’s Cathedral, the site of where St. Willibrord and his colleagues were possibly ordained.

The delegation also visited Visual, Borris House, St. Mullins and had a walking tour of Carlow Town. The visit on the Carlow side was coordinated by Tully’s Travel and Carlow County Council, through Carlow County Museum. It is planned that a Carlow group will visit Echternach in June 2020 to partake in the ‘hopping procession’. Details of the visit will be advertised in due course and members of the public are encouraged to attend. 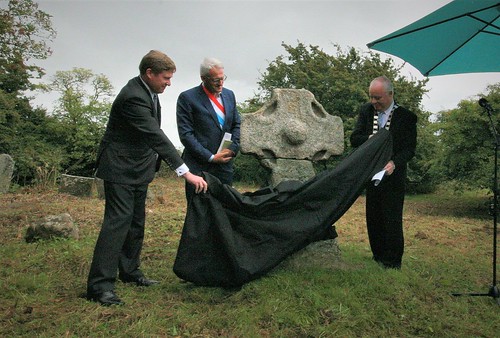