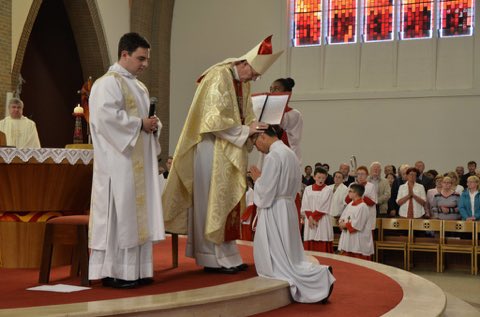 Homily at Ordination to the Diaconate of Joseph Yang Shuai SVD

The image that has in recent years become best associated with the diaconate is a painting by the late German priest, Fr. Seiger Koder, who died in February last year, just after his ninetieth birthday. Koder, himself was a prisoner of war during World War II. In his priesthood he combined his work as a Parish Priest with his work as a most respected artist. His depiction of the Washing of the Feet is possibly that image most associated with the diaconate as the face of Christ is reflected in the bowl of water. Similar paintings of the Samaritan Woman at the Well and the Last Supper equally see the face of Christ reflected in the well and in the chalice of wine. I’m not sure if he painted what we familiarly know as ‘The Good Samaritan’, but what really is for Luke ‘The Compassionate Samaritan’, but if he did, I have no doubt the face of Christ would be transposed on that Samaritan traveller.

Our scripture this Sunday in the depths of the Ordinary of the Liturgical Year is very appropriate for a celebration like todays, the ordination of Joseph to the diaconate. Many people ask, whats Joseph’s connection to Ireland, to Portlaoise and to Maynooth. It’s interesting it was from Maynooth exactly one hundred years ago the Maynooth Mission to China was concieved, through the courage and conviction of Edward Galvin and John Blowick. Today that project continues to be nutured with the work of the Columban Fathers and Sisters in many parts of our world.

Joseph Yang Shuai arrived to Ireland on the coat-tails of Melchior, Balthazar and Caspar on January 6th 2012. He completed three years of theological studies and completely immersed himself in everything that is wholesome in the life of the college, spiritually, academically and socially. I know his presence there added hugely to the spirit and character of the seminary. Here in Portlaoise Parish he spent his pastoral year and made many friends. Portlaoise became for Joseph a bolthole for someone whose community house was quite close to the seminary and whose family and home was several thousands of kilometers away.

So returning to the scripture. Joseph will be ordained a deacon for the Divine Word Missionaries. Like the Columbans, the Divine Word Missionaries is also a missionary congregation, only that they are the Church’s largest missionary congregation. The SVD website talks about them working in seventy-three countries in every continent. Their specialised areas of ministry include communications, mission awareness and the biblical apostolate. Joseph will in the coming year pursue specialised studies himself in sacred scripture to equip more fully for this key apostolate.

Deuteronomy today speaks about the primacy of God’s Word – like travelling on that road from Jerusalem to Jericho – often we are too busy or distracted to hear that word. It was compassion that led the Samaritan to bandage the wounds of the one who was beaten and broken. And he did what a deacon is called to do, he promised to return to “make good any extra expense you have”[1]. It could as easily have been the road from Portlaoise to Portarlington or Shanghai to Shenzhen or as Joseph may experience in time the road from Salta to San Miguel de Tucamán in Argentina.

All of us, lay and ordained, are called to give service in different areas of our church – it is seen as living out our baptismal calling and the firming up of that call during Confirmation. A deacon is called to serve and to be of service; it’s for him a special calling, as in Joseph’s case for a period of time before Ordination. There is a danger that the focus can be on priestly ordination and the diaconate year can be slithered over, as if it were of no great import. Nothing could be further from the truth. Deacons are not Priests and this privileged time must allow them opportunity and space to linger with those whose bruises need bandaging and hearts need healing, A deacon shouldn’t be in a rush; he needs to witness sometimes by bringing to life that beautiful word in the very first psalm – lingering. The greatest gift a priest is to a parish and to a community is presence; the greatest gift a deacon brings is the ability to linger, not to pass by, but to see, to look and to act.

In recent days I came across a book in the library at Bishop’s House, Carlow entitled Irish-Argentine Catholic Directory 1934. It was compiled for the 32nd International Eucharistic Congress in Beunos Aires in October of that year. It helpfully lists the huge number of Irish priests serving then in Argentina. Of course in your appointment there by Superiors in Rome, you are following in the footsteps of one of the greatest Irish laymen from quite close to here near Tullamore, Alfie Lambe, whose work promoting the Legion contributed hugely to the evangelisation of the Argentine and surrounding countries.

Today is a huge day for family and friends, for the Church and particularly the Divine Word Missionaries – may we all be blessed in this young man’s Yes to following Christ and witnessing to Him by his noble lifestyle and by his sincere dedication to prayer.

Bishop Denis’ opening address at the recent Assembly of Priests and...