Mass of Thanksgiving for WMOF

On Friday 28th September Bishop Denis celebrated Mass in the Cathedral of the Assumption, Carlow with all who answered the invitation to come together and give thanks for the World Meeting of Families 2018.

A powerful occasion enjoyed by many.

During his introduction Bishop Denis commented “We once again gather as a Diocesan Family, a family of 56 parishes to give thanks for the World Meeting of Families, now just over a month ago. A few days that passed very quickly but remain very memorable.

Maybe you were in the RDS, perhaps you got a ticket for Croke Park (the tickets that seemed to be as scarce as on an All-Ireland football or hurling final Sunday!) or you made it to the Phoenix Park, despite the inclement weather, the over-regulated transport plan and the 8km walk!

Maybe you were a local Parish Rep who literally kept the world Meeting of Families candle burning at parish level in many ways during the past year, or a member of the Diocesan Choir that contributed hugely to the chorus of song and praise that was in itself ‘a joy for all the earth’, or maybe you had a part to play in one of the liturgies, panel discussions or on the Diocesan Stand in the Simmonscourt at the RDS. Perhaps you watched everything from the comfort of your home, wall to wall coverage from the armchair of your sitting room, you were with us in spirit.

As we gather, we say thanks for everything the World Meeting was and more importantly everything that family is. For fissures and fractures that are part of all our families, we pray for God’s love and mercy, knowing that His love and His mercy are never conditional or calibrated and so we pray …

“Good King Wenceslas looked out
On the Feast of Stephen
When the snow lay round about
Deep and crisp and even”[1].

I can only imagine, you are saying Bishop Denis that’s a Christmas Carol, this is not Christmas time! I love the book of Ecclesiastes and its reflection on time, “there is a season for everything, a time for every occupation …”[2]. Let’s just park the Christmas carol for a moment, to me it seemed like the right time tonight to come together and say thanks. I deeply appreciate those who are here tonight, with short enough notice. But I thought it was right we come together, right we say thanks and right we do so as a diocesan family.

A diocesan family of 56 parishes. 56 parishes with thousands of families. Families that come in many different forms and realities, but each one is family. Family is not a remote ideological notion but the place where compassion, kindness, gentleness, patience and forgiveness are learned and lived. I have said many times no one comes from a perfect family, we might like to, we might aspire to, but the reality for most is very different.

So, it’s a just over a month from the World Meeting of Families and a few days short of three months to Christmas Day. Today is the feast of St. Wenceslaus, a Bohemian martyr born in the year 907AD. Talk about a perfect family – it was his grandmother who reared him, and it was his own brother who betrayed him and murdered him. Tough stuff but this also is family. Tensions arise. People struggle. People fail. People are unfaithful. Families can be places of violence and harshness.

“Brightly shone the moon that night
Though the frost was cruel
When a poor man came in sight
Gathering winter fuel”[3].

But the challenge is to find a new language to speak about family. We saw it in the words of Pope Francis to the young couples gathered in the Pro-Cathedral getting married. We heard it in the words in the Nunciature at his meeting with victims of abuse and his honest exchange with his Jesuit confreres afterwards. We noticed it as he mingled with the forgotten in the Capuchin Centre, his words to homeless families: “they (the Capuchins) help you without detracting from your dignity. For them, each of you is Jesus Christ”[4]. The face of Jesus Christ so evident in the care and compassion of Br. Kevin and his team.

A new language that isn’t always filled with noise. I was struck by the stillness and silence of Knock. I was moved by the quiet moment of prayer at the candle lit for victims of abuse in the Pro-Cathedral. I was touched by that selfie moment at the Festival of Families in Croke Park as Alison Nevin from Swords took the camera she wasn’t supposed to have and did what we would have all done, asked Pope Francis for a selfie! Moments like that come once in a lifetime.

An Taoiseach, Leo Varadkar invited us as church to engage with him and government in a new language “to build a new relationship between church and state in Ireland – a new covenant for the 21st Century … one in which religion is no longer at the centre of our society, but in which it still has an important place”[5]. As a country our culture has been shaped by Catholicism for decades; we are now in a different space and returning to Ecclesiastes in a different time: “a time for tearing, a time for sewing; a time for keeping silent, a time for speaking”[6]. Our question as church, our dilemma as diocesan family do we revert to our individual silos or do we work together for the building up of his kingdom?

“Bring me flesh and bring me wine
Bring me pine logs hither
Thou and I shall see him dine
When we bear them hither”[7].

The gospel of the family is joy for the world. We now need to reflect on how we can be as people of faith, people who are part of families that joy for the world? King Wenceslaus and his page spent their time as the well-known carol reminds us reaching out to the poor, to the margins, to the extremities. Luke’s gospel reflects on the identity of Christ. “Who do you say I am?”[8], Jesus asks off all of us this Friday night in the Cathedral as we give thanks for the World Meeting of Families. Knowing Christ allows us and prompts us to be His face to the poor, the homeless, the estranged and the heartbroken.

On this night forty years ago Pope John Paul I died, after one of the shortest pontificates ever, just 33 days. At his funeral Mass it was observed “he passed as a meteor which unexpectedly lights up the heavens and then disappear, leaving us amazed and astonished”[9]. His motto was very simply “Humilitas”. He often described himself as “a poor man accustomed to small things and silence”. As Patriarch of Venice he opened his residence to all who knocked: priests, penitents, drug addicts, drunks, the destitute. We should never be too busy to look after the little ones. His last address was to the Bishops of the Philippines on their Ad Limina Visit, where he reminded them: “evangelisation involves an explicit teaching about the name of Jesus, his identity, his teaching, his Kingdom and his promises. And his chief promise is eternal life. Jesus truly has words that lead us to eternal life”[10]. So, before we ever had Pope Francis, we had Pope John Paul I, I think he was the greatest influence on my life as a fifteen-year-old.

“Therefore Christian men, be sure
Wealth or rank possessing
Ye, who now will bless the poor
Shall yourselves find blessing”[11].

Cardinal Tagle of the Philippines was twenty-one years of age at the time of that Ad Limina visit by the Philippino Bishops with Pope John Paul I. His input at the World Meeting of Families Pastoral Congress a month ago was for me a highlight: ‘Choose Life – Pope Francis on the throw-away culture’. From my limited research I estimate that the average consumer power tool is used for ten minutes in its entire life, but it takes hundreds of times its own weight to manufacture such an object. I think of the many gadgets I picked up in Aldi and Lidl as I brought my late mother shopping. Gadgets to prise up heavy furniture; gadgets to drill into walls, gadgets to speed open wheel nuts. Again, a verse from the book of Ecclesiastes challenges greatly: “a time for time for searching, a time for losing; a time for keeping, a time for throwing away”[12].

As we give thanks for family and the events that brought us together as a diocesan family over the past twelve months – picnics, fun-days, Amoris programmes to mention but a few – may we remember always that together we are stronger, 56 parishes, one diocese, one family. 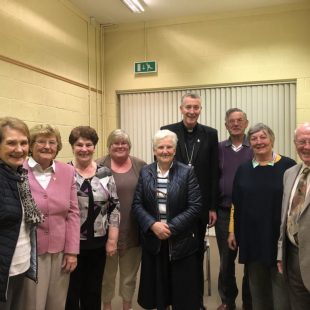 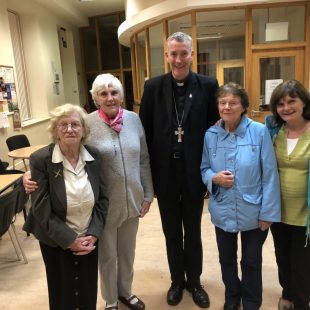 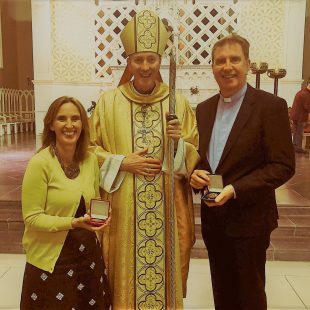 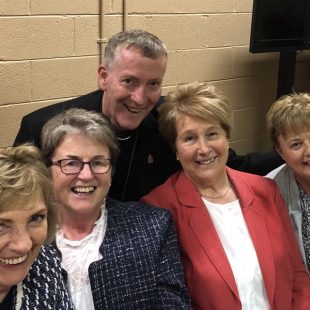 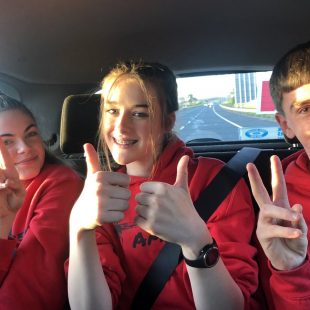