The first Mass seems to have been celebrated here in the Marian Year of 1954 with the bit of money left over from erecting a stage down below before the days of the Dance Halls. The decision was made to erect a Cross on Tinnecarrig with the permission of Jimmy Lennon. The first Cross here was made in Paddy Cahill’s, Graignamanagh, erected in June 1951. A replacement Cross was erected in the 1976. This time made of steel, the steel purchased by Andy Nolan in New Ross and made Andy & Noel in Noel Quigley’s yard in Glynn. Indeed it is Andy Nolan & Kathryn Moloney I must thank for the very kind invitation to be here today.

Mass has been periodically celebrated here. In the Millennium year 2000, and again in 2008 and 2009. It was in those years the Cross was lit up to mark the great feasts of Christmas and Easter. On days like this and at times like this we remember absent friends, those gone before us leaving footprints on the sands of time. We think of Fr. Pierce, Fr. Moling and the many Committee Members, neighbours and friends to Tinnecarrig now gone to their eternal rest.

Faith is finding words when we thought we were incapable of speaking! A moment of reassurance; an unexpected experience; a privileged encounter. Abraham and Sarah had that kind of faith, in the conversation of the gospel “they were dressed for action”[1]. Remember the days when the men wore hats and the ladies the mantilla veils, wearing our ‘Sunday Best’! Let’s gather our thoughts, compose ourselves as we call to mind our lack of faith and together we gather on Holy ground …

We’re all used to kitchen tables! Irish society revolves around the Aga or pulling up a chair up around the table! Reading myself a little into the history and story of Tinnecarrig Rock, I notice that the social aspect of this gathering is as much photographed and recorded for posterity as the celebration of the Mass. Patterns and Pilgrimages punctuate the Irish summer calendar. A few weeks ago we had the Pattern at St. Mullins.  Last Sunday week we celebrated Reek Sunday with the climbing of Croagh Patrick, in recent days a group from Rathvilly have gone on pilgrimage to Lough Derg and this coming week sees the start of the Knock Novena. I haven’t mentioned the Galway Races or Gowran but you get the message!

Tinnecarrig is less well known than some of the earlier mentioned sites. I too had to do a little digging to find the story and origin of this particular devotion. I notice it clashes with an All-Ireland Football Semi-final; there would be no fear in these hurling lands of it ever clashing with an All-Ireland Hurling match! It is no mistake that the Holy Year 1954 gave this site a local recognition. And yet there is no well here. Many of the sites or patterns that originate to that Holy Year involve a Statue of Our Lady and a spring of eater. Reminiscent of our Pilgrimage to Lourdes from where we returned only in recent days. Before the advent of Ryan Air or Tour Operators, the Irish people celebrated their own Lourdes, their own Knock pretty much at every crossroads, hill or incline. An indentation such as a rock here at Tinnecarrig was traditionally attributed to variety of saintly body-parts. I’m not sure which part of the anatomy Tinnecarrig represents, but we can be sure we stand on holy ground.

In scripture Martha was renowned for her Bethany culinary skills! Remember the two disciples at the Emmaus Supper table whose eyes were opened, but it was then too late! But never before, like in this afternoon’s gospel was the concentration on “dress”, on “attire”, on “aprons”. It’s impossible to buy a wrap-around or tie back apron today! Fashion trends are veering towards full length ‘around the neck’ aprons.

Imagine being told that our God wears an apron! The returning Master of the gospel parable waits on his attentive servants. Roles are reversed, but then didn’t that happen before? At the Last Supper wasn’t another apron wrapped around His waist as He washed the dusty sweaty feet of weary disciples. Remember Pope Francis and that prison outside Rome, washing the feet of the inmates on Holy Thursday evenings. Actions speak louder than words.

The gospel invites us to “be dressed for action”[2]. It’s not about having degrees or qualifications; being equipped with weapons or armour; or having enough money put by for a rainy day; but reaching out for that apron! When we wear the apron, we serve those around us. So, this is one Sunday where it’s more important who wears the apron than who is wearing the trousers!!

An American Priest who was leaving one parish and moving into another and the parish he was leaving gave him a gift – it was an apron. His was a red apron, his name was written on top of it and in the middle were the initials of the parish. It represented his work of service to the people of the parish; his work that included the basin and towel; his work of being the servant leader in the community, in the parish.

My mother loved an apron, hers was a simple one that covered from the waist down – her only problem is too often she forgot to take it off her leaving home! Her Sunday best included often her apron! And what harm? An apron is also a clerical garment, better known as a ‘Gremial Veil’ – a cloth placed on the lap of a Bishop during the Rite of Anointing during sacramental moments especially Ordination.

My prayer and hope is that we will see a stirring of vocations amongst the young people, attending todays devotion. Numbers may be much smaller than our own days of seminary formation, but the need for priests, the need for trained lay parish leaders (women & men), the need for ministers of hospitality to one another was never greater in a lonelier and more isolated Ireland. My prayer and hope is that events like this on Tinnecarrig Rock will help bridge that gap. 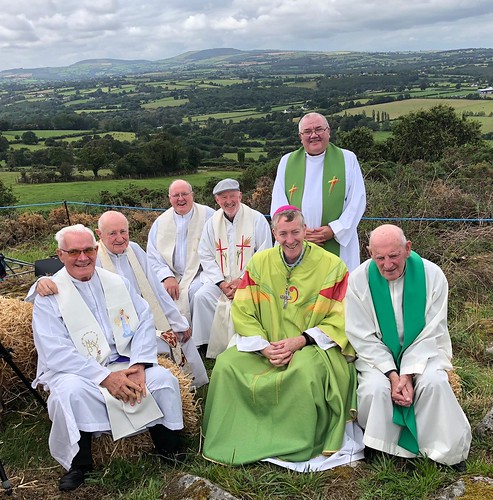