I am delighted to be with you, to honour once more the memory of one of my illustrious predecessors, JKL – Bishop James Doyle, professor of Theology here in Carlow College. Of whom the British Prime Minister Edward Gladstone described as “the prelate who, more than any other, represented his church and influenced the mind of England in favour of concession at the time of emancipation”.

The Annuario Pontificio is a book that is published annually in Rome, listing those who serve in leadership in every diocese across the world. The 2017 edition costs €74.10. It runs to 2,400 pages! Not exactly bedside reading. There are 640 archdioceses and 2,206 dioceses, Kildare & Leighlin just being one of them. It was first published in 1716. I have no doubt the editions covering the years 1819 – 1834 would have listed Kildare & Leighlin: Doyle, James Warren not his own favourite monogram J.K.L. Later Tom McGrath, who is the recognised authority on J.K.L. will speak on his huge role in Irish education.

Today is Foundation Day in the College as we recall the early lay and clerical students who entered these hallowed doors on October 1st 1793, while Bishop James Keeffe had founded the college in 1782. It would be some years later before the enrolment of students. Foundation Day remembers those who dug the well and laid the foundations all those years back, a well that we drink from today and a college building and campus that remains loyal to its founding articles.

On August 14th last, I was privileged with the honour of welcoming Archbishop Jude Thaddeus Okolo the fourteenth Apostolic Nuncio to Ireland. He comes to Ireland at a time of three vacant dioceses and three dioceses where the bishop has exceeded the mandatory retirement age of 75. In other words he has six dioceses to fill as well as every other aspect of being a Nuncio, including remote preparations for the much anticipated and hoped for visit of Pope Francis to next year’s World Meeting of Families in Dublin.

J.K.L. was a Wexford man, a yellow belly, who was also an Augustinian. His appointment here in the college was in July 1813 originally and not surprisingly as Professor of Rhetoric, before a year later assuming the chair in Theology. Doyle was a Bishop able to think outside the box, to see the bigger picture in education, in social justice, in European affairs. Last night I watched the scenes coming from Catalonia, it saddened me that this kind of rioting is happening on our doorstep in continental Europe. We need leaders more than ever in church, in state, in society who are able to see the bigger picture. An Augustinian could do that 198 years ago, may we find more to lead our country and society into the future. It gives me great pleasure to now unveil this commemorative plaque … 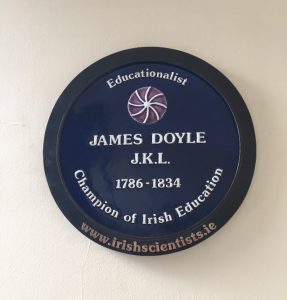