The present Church of St Brigid at Milltown was erected in 1817. An inserted tablet records that a Chapel of ease was erected here in 1817 by Rev. John Lawler P.P. and the subscription of the faithful. It was renovated and reroofed in 1961. The Rev. John Lawlor who erected the Church and the teacher’s recidence, was Parish Priest of Allen 1802 to 1830. He was a native of Morristown in the parish of Monasterevan. Two priests lie interred in the church, the Rev. Patrick Kelly who died on June 22nd 1837 aged 26 years, and the Rev. Joseph Fitzgerald who died on 22nd February 1853 aged 29 years. A portion of the east gable of an older chapel of the penal times still stands near the modern church. An even older church at Milltown or Ballymuillen is mentioned again in Dr McGeoghegans list of churches. The Church of St Brigid underwent major renovation in 2007/08. 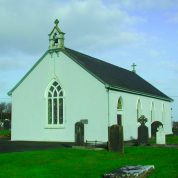