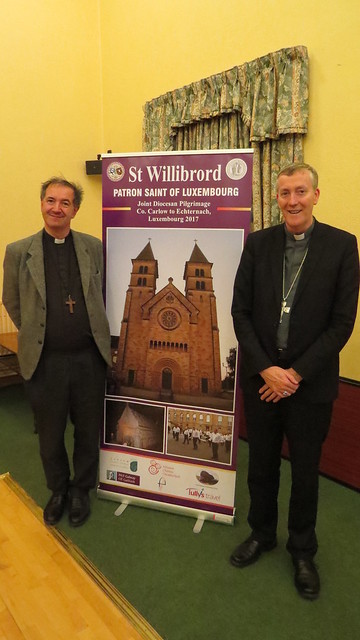 Joint Diocesan Launch of the Pilgrimage to Echternach, Luxembourg 2017

I am absolutely delighted to be so closely associated with the launch of this Inter-Church and Inter-Diocesan Pilgrimage in honour of St. Willibrord which will take place in June 2017. We are exactly 494 days away from that pilgrimage! I want at the very outset, to thank Dermot Mulligan, Museum Curator and indeed the Ireland 2016 Carlow Coordinator for the huge amount of work he has to date invested into the planning of this pilgrimage. I’m also very delighted to work alongside Bishop Michael Burrows and the Church of Ireland community in planning this special trip.

Let us begin with the basics – we don’t know much about Luxembourg except for their five victories in the Eurovision Song Contest – 1961, 1965, 1972, 1973 and 1983. They decided that the following year, 1984, would be their last year in the contest! It’s fair to say they were the masters of Eurovision before Ireland starting getting good at the same thing! Maybe we should have followed the Luxembourg example and pulled out of the competition after our last win, twenty years ago. Another place where perhaps Luxembourg came into our orbit was when as youngsters we tuned into ‘Radio Luxembourg’, catching up with the latest chart hits. Nowadays NetFlix, You-Tube and Whatsapp fill in those blanks!

We probably don’t know much about St. Willibrord either. If we mentioned a pilgrimage around St. Columbanus or St. Patrick or St. Brigid – well we would have a wealth of historical and oral tradition to delve into. When it comes to St. Willibrord, basically he is associated with an ecclesiastical settlement at Rathmelsh or Clonmelsh Graveyard in the townland of Garryhundon in modern day Tinryland Parish. It was there between the years 678 and 690 AD that Willibrord was trained and later ordained. And it was from Rathmelsh that Willibrord led eleven other Carlow based monks on mission work into continental Europe.   We are here this evening to have our launch in Leighlin because the beautiful Cathedral of St. Laserian in Old Leighlin had a very close association with the monastery where Willibrord was formed.

Christian Unity Week 2016 drew to a close last Monday with the customary feast of ‘The Conversion of St. Paul the Apostle’, on January 25th. I think the project we are launching this evening will do more for Christian Unity than any number of Christian Unity Weeks. I am, with the Administrator of the Cathedral, Fr. John Cummins, so delighted to be associated with this launch, with this venture and with this project. We look forward to establishing in the coming year an appropriate reliquary in the Cathedral where the relic of St. Willibrord which will be presented to us during our 2017 Pilgrimage, will find a fitting home.

In these days of Operation Transformation, the thought of hopping as an exercise has not yet been raised by the programme leaders. Yet hopping is a particular part of this 2017 Pilgrimage. The hopping aspect received UNESCO World Heritage Status in 2010. It looks like we should all start hopping, because in the national chart for the ‘Million Pound Challenge’ associated with Operation Transformation, County Carlow is currently lagging well back, having registered only 9.5 lbs in the first two weeks of the competition! Let’s not panic, County Armagh hasn’t even registered yet! Starting to train for the Hopping Procession could be our trump card! The hopping procession is associated with St. Willibrord, dating back to the eleventh century. As a saint he is revered for his missionary activity, his kindness, his gift of healing and much more. Once again I am delighted to be here this evening and to join with Bishop Michael Burrows in launching this pilgrimage into the heart of Europe to rediscover and recharge the heart of our faith.