Words of Bishop Denis at the unveiling of a Commemorative Plaque at St. Leo’s College, Carlow on Sunday 4th November 2018.

“There was a letter in last Thursday’s Irish Times that caught my eye. Written by Dr. Una Agnew simply titled ‘The Nun’s side of the story’. She concludes “if history is to be written correctly, it must embrace all narratives and contexts, which will allow posterity make a fair assessment of the services religious and their lay colleagues have given to shape the heart and soul of our country”. The most recent issue of the Jesuit quarterly magazine ‘Studies’ features a number of excellent articles under the caption ‘The Nuns’ Story – writing the record’.  We have come this November afternoon to publicly acknowledge, recognise and give thanks to the contribution Mercy Sisters and indeed religious generally have made to Irish life and culture and life and culture far beyond our shores.

The last time so many stood at the entrance gates of St. Leo’s here was for the removal of Sr. Maureen last Wednesday evening, and in the past year, for the removals of Sr. Áine, Sr. Philomena and Sr. Elizabeth. The very first nun to die in St. Leo’s was Sr. Kate Coffey, who fell in the snow while visiting the sick and died from a haemorrhage. She was in the very first Profession group, presided over by Sr. Frances Warde. She is buried in the Presentation Convent plot adjoining the Cathedral. The link with the Presentation Sisters is very interesting, Mother Catherine McAuley entered Presentation Convent in Georges Hill for a couple of years to study for the religious life, appointing Frances Warde mistress in her absence. In 1832 Frances Warde was the first Sister professed by Mother Catherine in the very first Mercy Convent in the world – Baggot Street. Tullamore would follow in a few years, and then Charleville in Cork with St. Leo’s in Carlow, coming in fourth in 1837. The Convent building here was the first Mercy construction of its type and time.

It is essentially the death of the second President of Carlow College, St. Patrick’s, the Dominican Andrew Fitzgerald in 1843, a President who had played a huge part in welcoming the Presentation Sisters to Carlow in 1831 and the Mercy Sisters to St. Leo’s in 1837; it was his death that brought Bishop Michael O’Connor of the newly established diocese of Pittsburgh, Pennsylvania to Carlow. The Annals in St. Leo’s suggest he was already familiar with the Mercy Sisters, having been tasked with translating the rule Catherine McAuley sent to Rome into Latin. Mary O’Sullivan challenges this point in her appreciated tome on Catherine McAuley ‘The Path of Mercy’. While she acknowledges what the local annals say, she suggests the translator was a Carmelite, Richard Colgan. Michael O’Connor had completed his studies in Rome by 1834, then served as vice-rector of the Irish College until 1836 or 1837 when he returned to Ireland. By 1839 he went to Philadelphia to teach, and by 1840 was the first Bishop of Pittsburgh. O’Sullivan contends “he may have translated the two chapters of the Rule Catherine sent to Rome in December 1833, but probably not the final 1839 text”[1].

Bishop Michael O’Connor invited Sisters to join him on his new mission in Pittsburgh. Of the thirty-six members of the St. Leo’s Community then, thirty-five volunteered to travel with him to the new world. Every teacher that ever taught in St. Leo’s and Clare Ryan, the Principal here will verify this, the first thing a teacher will ask, is who was the one who didn’t volunteer? Again I only learned this morning that the one who didn’t volunteer, eventually would travel herself, possibly out of obedience – Veronica McDarby. Those who went through these gates 175 years ago were Frances Warde as leader, Josephine Cullen, Aloysia and Elizabeth Strange, Philomena Reid, Agatha O’Brien and Veronica McDarby herself. By all accounts it was a very tough journey on the schooner vessel ‘Queen of the West’. A journey lasting four weeks and two days! And of course after they hit land at New York, they still had a ten day journey to travel by train and by coach, a journey in the dark and cold of winter to be a presence of peace and a witness of God’s love. Seventeen travelled bound for Pittsburgh. The first name to appear is Michael O’Connor, thirty-three years of age, identified as “bishop”; next a “clergyman” Robert A. Wilson; then eight described as “gentlemen”, among whom were seminarians travelling with Bishop O’Connor to his new diocese. Finally the last names on the roster are the seven Carlow women identified as “Sisters of Mercy”. Bishop O’Connor suggested that Frances and her companions make the journey in secular clothes, fearing their habits might not withstand the salt and spray! An interesting aside Frances was also thirty-three years of age. These were very brave women and very brave times. Imagine leaving all that was familiar for a very strange land?

Others will speak more eloquently later of their huge contribution to the American church in education and healthcare. Frances Warde is laid to rest in New Hampshire; Josephine Cullen, Elizabeth & Aloysia Strange, Veronica McDarby, Philomena Reid,  are laid to rest in St. Xavier’s Cemetery, Pittsburgh while Agatha O’Brien is buried in Chicago. All of them remembered on this November day and all of them remembered every time we walk around the Mercy Plot in St. Mary’s, the Plot behind me in the convent grounds and indeed the Presentation Plot at the Cathedral. And all remembered as we pass this way and see this plaque for many years to come. As I leave Bishop’s House every day the first thing I’ll see is this commemorative plaque. May it remind us of those who walked through these gates into an unknown world to be a presence of peace and a witness to God’s love – “Pater, non mea voluntas, sed tua fiat” – Father, not mine, but yours be done. 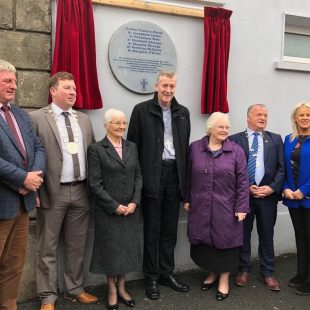 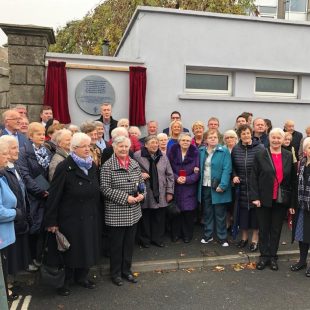 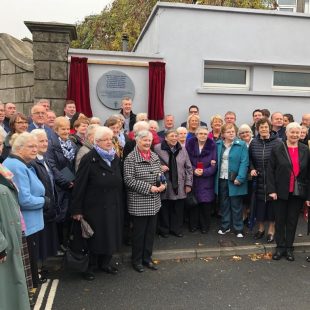