Homily of Bishop Denis on the Feast of St Clare

We gather this Saturday morning, the eleventh day of August 2018 on this Feast of St. Clare to honour the Poor Clare’s and to celebrate this significant Feastday. We gather to mark the 125th Anniversary of the Poor Clare’s presence, while not always in the adjoining monastery, their earliest presence is marked by the historical plaque on the bridge that links Graigue and Carlow.

The Poor Clare’s are an indispensable part of Carlow and Graiguecullen. They are an invaluable powerhouse of prayer for the wider Diocese and indeed much further afield. Many of you have travelled long journies to be here this morning. I look forward to meeting you who travel great distances every year at the refreshments outside.

You are here because the Poor Clares were there for you at an important time in your life. Their presence is something deeply valued and treasured.

As we gather to pray 125 years after the original foundation and 765 years after the death of St. Clare, and 14 days practically to the hour when Pope Francis will walk amongst us, let us call to mind our sins and pray for forgiveness …

When the Alitalia flight touches down on a quiet part of Dublin airport this day fortnight, not a great remove indeed from this very time, Pope Francis will be greeted by a very small modest welcoming party as he walks on Irish soil for the second time in his life. We are told he studied English in Dublin for eight weeks in the early 1980’s, let’s not make any comment on his standard of English today, a bit like the aunt who tells you she hears nothing, you can be sure he’ll hear and understand everything!

His greeting at Dublin Airport will be brief before making his way for a courtesy visit to Áras an Uachtaráin where he’ll plant a tree and hear a children’s choir perform. Then to Dublin Castle for an interaction with guests of the State and the visit proper will unfurl with spending time with engaged and newly-wed couples in the Pro-Cathedral, with homeless families in the Capuchin Day Centre; with families of every shape, size and situation at the World Meeting of Families Festival of Families in Croke Park. That’s just Day 1. Day 2 Sunday, tomorrow fortnight begins with an early morning flight to Knock, praying the Angelus there and asking Our Lady to bless his visit and enhance our understanding and appreciation of family life before returning for the Papal Mass with well over half a million in the Phoenix Park. After a brief meeting with the Bishops he will be off to the airport for a 7.30pm return flight to Rome.

For months I have reflected on what might be the legacy of this visit. Already you can imagine journalists making odious comparisons between 1979 and 2018, you might say 40 years. 1.25 million greeted St. John Paul II in Phoenix Park, not to mention all who went to Killineer, Maynooth, Clonmacnoise, Ballybrit, Limerick and Knock. John Paul was paying a Pastoral Visit to Ireland; John Paul was then 59 when he visited Ireland; Pope Francis is 81, his visit is for the World Meeting of Families. Then in 1979 there was very little concern around ‘health’ and ‘safety’, now everything has to have its own risk assessment. You cannot climb a two step ladder without carrying out a customary ‘risk assessment’.

The capacity in the Phoenix Park is determined by the time it takes for that number to leave the Park safely through its eight exits. Everyone must have a ticket, there is no cost to the ticket, but the coded ticket determines the gate you enter, the direction you are entering from and the area of the Park you are assigned to. In 1979 people travelled through the night to go from one venue to the next. We went to bed when John Paul left for the United Nations in New York! I was in Ballybrit! Hands up those who went to the Phoenix Park, Killineer, Clonmacnoise, Maynooth, Galway, Knock or Limerick!

The World Meeting of Families celebrates family life. No family is perfect, mine or yours. Maybe just stop there is there anyone here who comes from a perfect family? Clare whose feastday we celebrate today didn’t come from a perfect family either. Her family were privileged. Her dad and some of her family did everything possible to take her away from being under the influence of St. Francis. They saw Francis as kind of out of his mind. Clare was entitled to a dowry and the family were terrified and justified in being so that the dowry would be given to the poor. They turned up at the Convent of St. Paul where Clare was temporarily staying, asked for her and then stormed into the convent and tried to pull her from the chapel. She is reputed to have grasped the altar cloths and refused to budge.

Often family don’t understand a religious calling, then and now. I have met mothers terrified of what might happen their son if he entered seminary and was ordained. Their unfounded but understandable fears can block God’s call being answered. The young person must be completely determined and of strong will, like our friend St. Clare. Of course, with Clare’s family, her younger sister would in time steal away from the family, causing more heartaches and join Clare. Her mother was also betwixt and between!

What attracted Clare to Francis of Assisi and his simple lifestyle? What made Jorge Bergoglio inspirationally choose the name Francis when most might have imagined the new Pope would call himself John Paul III or Benedict XVII? What attracts us to travel from all over to be in the presence of the successors of St. Clare this morning in Graiguecullen? I think one word – simplicity. The world is characterised by superficiality and by shallowness and yet only simplicity is needed. We adults complicate matters far too much, that is why the younger amongst us will be first in His kingdom: “for to such as these belongs the kingdom of God”. In two week’s time, it will be the pictures from the Capuchin Day Centre; it will be the hug with the addict; it will be the embrace with the homeless family that will capture the eyes of the world media. Jorge Bergoglio, Francis has huge energy at 81; he won’t spare himself a moment. He has chosen Dublin to host the World Meeting because he knows like St. Clare’s family, no family is perfect. She was born into a wealthy family on July 16th 1194; she died penniless in 1253. What happened in between is she answered a profound call and we are all invited to do the same this day.

Reading the history of the Poor Clare’s coming to Carlow; they arrived at the Port in Drogheda, which I know very well. There was a chance for a while they might have settled in Stameen in Drogheda because complications arose around where they might live here in Carlow / Graiguecullen. Mother Seraphine and Mother Angela after the long journey from Drogheda to Carlow arrived to see Bishop Lynch in Tullow. There was some initial hope that their Carlow foundation would be financed by a Drogheda merchant, it didn’t come through! Bishop Lynch brought the two sisters to the Brigidines in Tullow who welcomed them, and fortified them for their last journey from Tullow to Carlow. That was 1893, they have been here ever since and simplicity has been their hallmark ever since.

Compliment May & Jim Hosey – both 80 today! An Australian joining us via the webcam! And many others who send prayers and best wishes this feastday morning.

A few years ago, on one of my early visits to the convent next door, the Poor Clare’s gave me a small pamphlet entitled: ‘In the Spirit of St. Clare’ – daily reflections to guide you through the week. I pray it every night, last night the prayer began as always with a quotation from St. Clare herself, this time the Second Letter of St. Clare: “Look upon Him who for you became despised and follow Him, though you become despised for His sake in this world.”

and the reflection beautifully follows:

“You are light, enfold me,
You are darkness, embrace me,
You are pain, hollow me,
You are love, overflow me.
The storms of change are you
And all peace of tranquil water.
You are all these things
and I thank you dear God.
Amen” 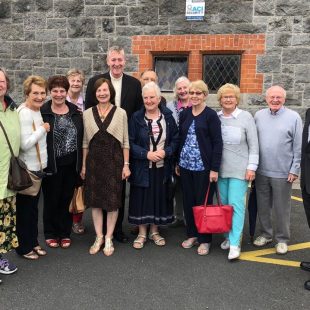 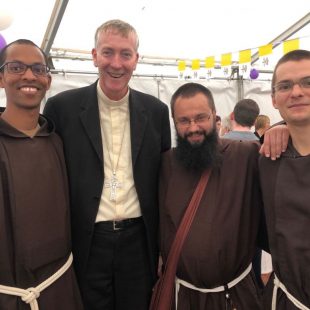 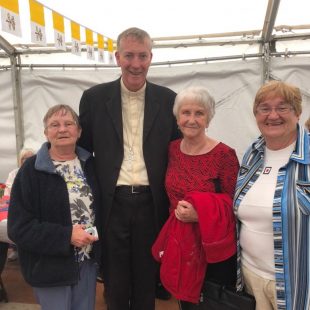 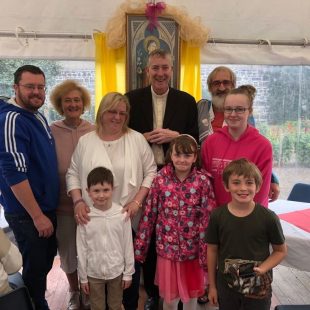 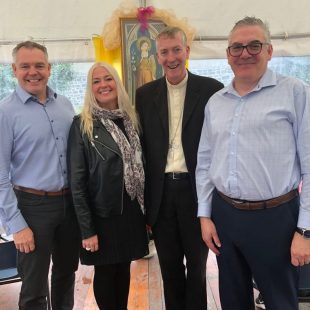 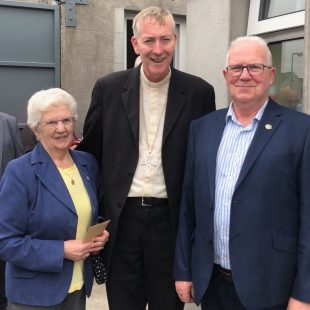 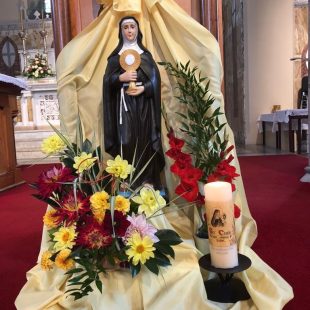