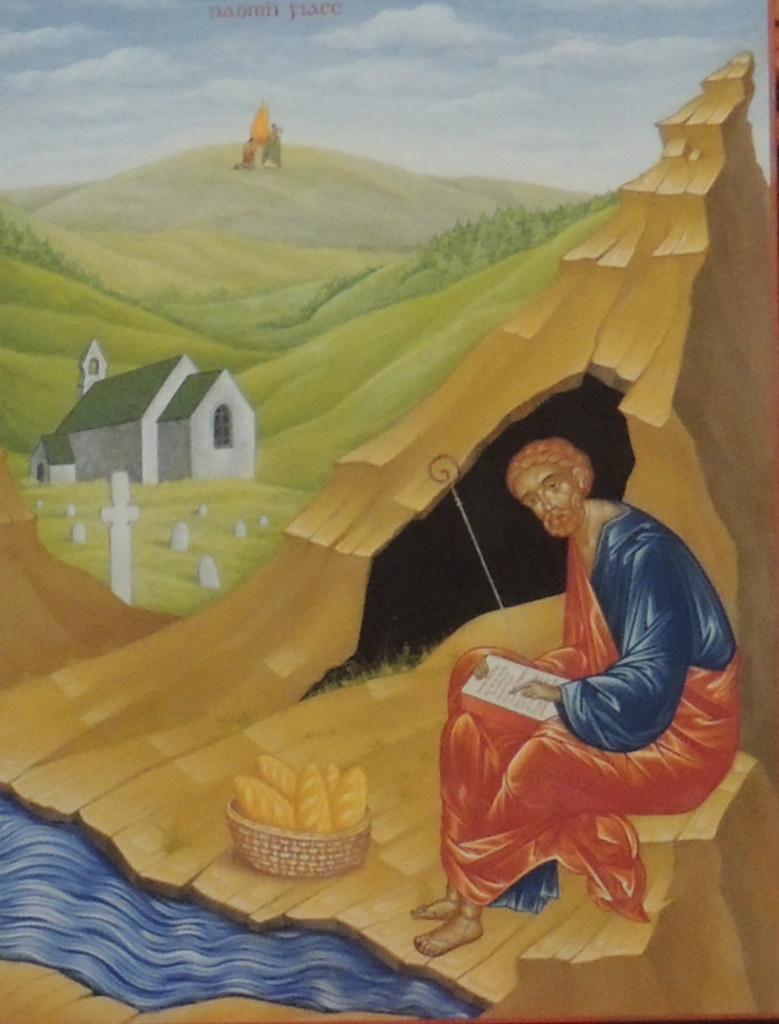 At the outset I want to stress that I’m very much still on a learning curve with respect to the ancient sacred story of this diocese. When I was announced as Bishop on May 7th 2013, I invoked that Tuesday morning, the protection of St. Brigid, St. Laserian and St. Conleth. I had to do a little work on the pronunciation of Laserian but that aside, I have since learned more of him from my wonderful visits a few miles south of here to Leighlin. There wasn’t that morning and indeed much since, any mention of St. Fiacc except for the splendid work that Joan and her team do in St. Fiacc’s House and the wonderful pupils who attend St. Fiacc’s National School.

So what of this Saint after whom a Support Care Home, a Primary School, a Soccer Club, a Swimming Pool, a Sports Hall even a number of choirs are called? I suggest that what St. Fintan is to the west of this Diocese and St. Moling is to the south of the Diocese, St. Fiacc is to the heart, to the centre of our Diocese. While I referenced the debate regarding the exact date of birth of our saint, there seems to be little dispute as to his age on death – “living to the ripe old age of 105”[1]. He would find good company with the increasing number of Irish women according to yesterday’s Irish Times[2] who are reaching the age of 110! All of them women, yet St. Fiacc in an age before Health & Safety regulations, the threat of MRSA infection and the availability of By-Pass or Stent surgery outlived most of our current generation!

This was the same Fiacc who took Lent a lot more seriously than our generation who has reduced it perhaps to sacrificing Fair City or Eastenders or at best giving up the few pints or the chocolates! Well Fiacc went out to a cave about seven miles from Sleaty for the forty days and nights, bringing five loaves mingled with ashes! He returned to his abbey at Sleaty using a subterranean passage and bringing the remnants of his loaves. He didn’t even eat all the bread he had been allocated! It was no wonder his health suffered and St. Patrick sent a chariot and horses from Armagh to assist him. Maybe St. Patrick was the VHI or Aviva or Call-Doc of the day!

This connection to Patrick is crucial in the story of Fiacc. Very briefly – Fiacc came from good stock; his dad was Erc, a Prince from the ancient kingdom, his mother was the sister of the chief bard of Leinster, Dubhtach. Fiacc, widowed himself at a young age with one son, was an apprentice bard. His poem on St. Patrick is probably one of the best sources for the history we have today of our national saint. When the same Patrick, defying the orders of King Laoghaire at Tara, lit the Easter fire at Slane, the lighting of the fire allowed him to encounter the apprentice bard Fiacc and also then a young druid Erc, both of whom would convert during the standoff that ensued. I liked Comerford’s line: “Fiacc was then a widower with one son, Fiacra, St. Patrick, having ‘put the grade of bishop on him’”[3] and the rest they say is history! Isn’t the phrase “the grade of bishop”[4] intriguing? I was equally intrigued that the father of Fiacc was also called Erc; my research suggests it was a different Erc who was then a young druid at Tara and who became the great disciple of Patrick and Bishop of Slane.

Sleaty becomes central in the Fiacc story because it was here that an old and aging St. Patrick marked out the site for the first Church. Some time earlier he had visited Sleaty to appoint Fiacc the first Archbishop of Leinster. In its halcyon days there were as many as sixty colleagues in the community. And like all leaders for whom succession is as important as decision making, his son Fiacra succeeded him! Was nepotism alive in the church of the fourth century? Or perhaps it was that Fiacra like his dad before him, like his grand-father on his mothers side was a poet, a wordsmith who could best understand and interpret the very young story of our faith, given to us by St. Patrick.

Maybe we still struggle in the Ireland, in the Graiguecullen / Killeshin of 2015 to understand the simplicity of the story of our faith handed to us by St. Patrick? A faith Patrick taught by using the teaching aid of a shamrock. A good teacher understands the valuable tools that teaching aids offer. In the coming days secondary school and primary school doors re-open. Our primary schools will introduce those in their first years of school to the new Catechetical Programme ‘Grow in Love’. Matthew’s gospel text gives us the fundamentals, the call to preach the gospel, the instruction to baptize and the assurance that “I am with you always; yes, to the end of time”[5]. Hopefully the young people beginning school will grow to appreciate this message.

In the usual August debate that takes place around school patronage and provision of places, it is clear that the local parish Catholic school continues to offer the most inclusive model of education in the Ireland of 2015. These debates play hardest on the good Principals and Staff in our schools who love their school and teach the curriculum. These debates end up in the realm of defensive argument, rather than asking the key question – Why are our schools over subscribed? It is because they are doing a good job and have been doing that job well for years. Commentators may complain that change in patronage is progressing too slowly; that’s because local communities are happy with the model that is best equipped and best serves local needs. For Fiacc and later his son Fiacra it was out here at Sleaty. As the new school year shortly begins, I commend our teachers and the whole school and catechetical community which supports them, for their dedication and commitment to the children in their care. May God’s blessing accompany them and all of us throughout the year ahead. St. Fiacc, pray for us. St. Erc, pray for us. St. Patrick, pray for us. Amen.

Sunday the Word of God